Dearborn-Detroit, Mich. – Many people have expressed alarm and concern about the hundreds of dead fish seen in the Lower Rouge River in recent weeks and the possible cause.  Friends of the Rouge values scientific data in making judgements and therefore did not want to be presumptive about the situation so we went to the agency that has the most knowledge, experience and well-founded data on fish in the Rouge River over time. We received the following response from the Michigan Department of Natural Resources.

The dead fish in question in the April 2019 Rouge River fish kill at Fort Street bridge were all gizzard shad.  These are a fish that most people do not know exist until they see them floating dead, which is a quite common occurrence.  There is some debate as to whether gizzard shad are native to the Great Lakes basins, and we are certainly at the northern extent of their range.

Gizzard shad, of all the fish in Michigan waters, are the most prone to natural die-offs.  This is related to their poor tolerance of long, prolonged cold winters and/or rapid temperature fluctuations in spring when their energy reserves are low.  One researcher from the US Geological Survey’s Upper Midwest Environmental Sciences Center estimated that natural die-offs can wipe-out 80-90% of the year’s shad.  Gizzard shad are known for having large cycles in their populations, where they build up large numbers and then have large die-offs.

A look at water temperatures at the gauging stations in the Raisin River and Rouge River during the timing of this gizzard shad die-off shows the rivers rose from about 44 degrees F on April 5 to over 56 degrees on April 9.  There was a particularly large rise April 5-7.  This is a very fast temperature rise in any system.  It would severely stress the gizzard shad by rapidly increasing their metabolism by 2-4 times in fish that have low energy reserves from less food consumption over winter.  This coincides with the timing of the die-off and was a clear contributor to the demise of these fish.

In the very rare instances when it actually is a pollution related event that leads to fish kills, almost all species and sizes of fish are impacted.  That is not what was observed in this instance in the Rouge.  DNR was able to send several freshly dead shad to the MSU Aquatic Animal Health Lab for analysis of bacterial and viral pathogens.  Culture testing is ongoing, but preliminary results show no sign of disease.  There were no signs of external bloody red hemorrhaging on the fish as was the case with the VHS virus outbreak in Lake St. Clair/Detroit River during 2017.

It is an alarming site to see that many dead fish, but many anglers and homeowners who have lived along Lake Erie, Lake St. Clair, and inland Lakes where they are present are well aware and used to this occurrence.  All one needs to do is type in “Gizzard shad die-off” in a google search to see news articles from many years past in all states in the upper Midwest.  Just a few for example are below, the first one is a very well written article that explains the role of gizzard shad as food for other animals quite well and why they die so easily.

There is an online reporting system and smart phone app available to report fish die offs of over 25 fish (MDNR Eyes in the field). There is also a 24-hour emergency hotline for suspected pollution releases, DEQ Pollution Emergency Response System 800-292-4706.

Friends of the Rouge (FOTR) is a nonprofit 501(c)(3) organization founded in 1986 to raise awareness about the need to clean up the Rouge River in southeast Michigan. Their mission is to restore, protect, and enhance the Rouge River watershed through stewardship, education, and collaboration. 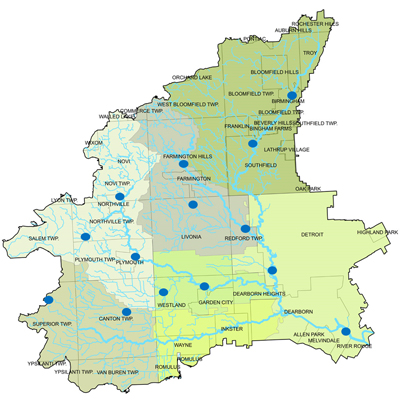